The Congregational United Church of Christ

The United Church of Christ

Our Denomination is United Church of Christ

We believe that Christ is the Head of the Church. The national presence of the UCC is headquartered in Cleveland, Ohio. Every two years, delegates from across the UCC meet in General Synod, the body that organizes the functions of the larger church. But unlike some other denominations, where governance is top-down, General Synod speaks to the individual congregations, but not for them. Because we are bound together in covenant, each congregation listens and considers the actions of the General Synod, but each makes its own decisions. Likewise, because we are in covenant with one another, the congregations agreeing with a resolution of General Synod respect the rights of other congregations to disagree. A good example is the 1985 General Synod Resolution to make the national setting of the UCC Open and Affirming as it regards the membership, leadership and employment of gay and lesbian persons. While that became policy for the national church upon passage, the resolution merely called on all congregations and other settings of the UCC to prayerfully consider the policy in their own setting. 30 years later, less than one-third of our congregations have actually declared themselves to be Open and Affirming Congregations (CUCC passed an Open and Affirming resolution in 2009.) Many feel that they’ve always been open to all, and see no need to adopt a policy or resolution, while others disagree with the notion, and still others have never even considered the resolution one way or the other. The local church has a great deal of freedom in most every aspect of their existence, tempered only by the covenant to work in Christian harmony and cooperation with each other.

The General Synod is representative of “Conferences,” geographic areas, some comprising a state, some part of a state, and others multiple states. Most Conferences are divided into smaller semi-geographic units, called Associations, usually with in local reach of their member congregations. Congregational United Church of Christ of St. Charles is part of the Fox Valley Association, and FVA is part of the Illinois Conference, representing more than 2/3 of the state. There is an Illinois South Conference that is centered in the Illinois communities east of St. Louis. It is at the Association level that ministry is authorized. The Association may admit new congregations to the UCC, the Association ordains new ministers, and oversees the authorization of all authorized ministers within it’s bounds. CUCCSTC elects two delegates, who may vote in meetings of the Association and of the Conference each year. While we do not currently have a youth delegate, we may elect one youth delegate with the same voting privileges as the other delegates. 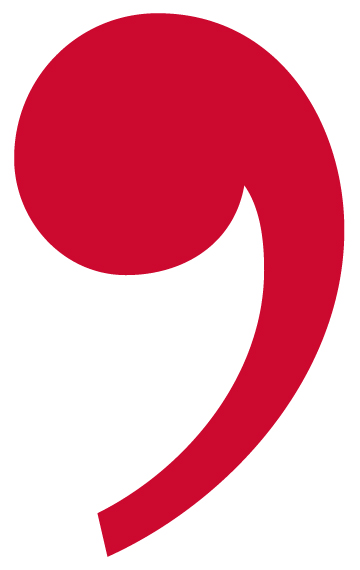 When the Pilgrims, forbears of the Congregational Church, boarded the Mayflower in 1620, their pastor, the Rev. John Robinson had to stay behind. But he sent them with these words, which are part of our DNA today, “…I am verily persuaded the Lord hath more truth yet to break forth out of His Holy Word.”
Translated into 21st century UCC, “God is Still Speaking.” The Still Speaking campaign was initiated to help explain something of our Faith and how we feel a need to relate scripture to the world around us, just as others did 2000 years ago, in a world that was very different in many ways. The red Comma was adopted as the symbol of the Still Speaking Movement, and comes from a letter Vaudeville and early television comedienne Gracie Allen left her husband, George Burns at her death. She cautioned him to “Never place a period where God has placed a comma. The Still Speaking God, indeed has more truth to break forth.